We just had to share this sweet story from one of our customers. We love working with people who share our compassion for animals, no matter the species. Enjoy! 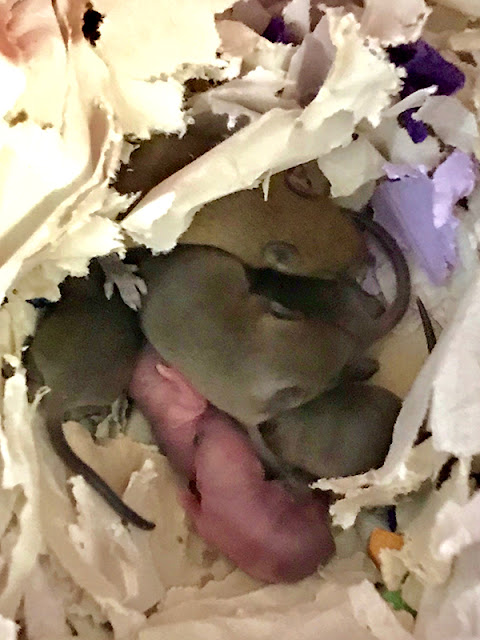 This is the picture of the little mouse nest I found while cleaning my garage. It was in a small doll's suitcase (circa 1964), nestled in a large cardboard box containing my childhood memorabilia. The babies were snuggled in a beautiful best made of holiday tissue paper and tiny shredded pieces of my beloved childhood books!
😂

When I realized mama was hiding in the box, but outside of the tiny suitcase, I quickly relocated the whole thing to a small, fenced area with my garbage and recycling. I covered the box with a big blanket, making sure the entrance/exit holes that the mother had obviously made were not blocked. We were having work done on the house, with workers coming and going, so I put a "PLEASE DO NOT MOVE" sign on top of the blanketed box.

For the next twelve days I checked on the mouse family daily. There were 14 babies - a few appeared younger (as seen in the photo) - maybe there was a second mother?

Often the mother was not present ... I'm assuming she was out scouting for food. I left water for her and seeds and grains from my pet rat's diet. All was happily eaten! It was fun watching how quickly they developed, and began running around! Four of the tiniest babies died. I buried them in a plant container full of colorful flowers.
😊

On the 12th day, when I went to say hello, I was surprised to find both the miniature suitcase and the box empty of mice! Other than one lone baby who jumped up and out and skittered off quicker than I could realize what had happened.

They had graduated from their nest and were all off figuring things out. I just prayed they ran in the direction of the creek next to my house, and not toward my garage! 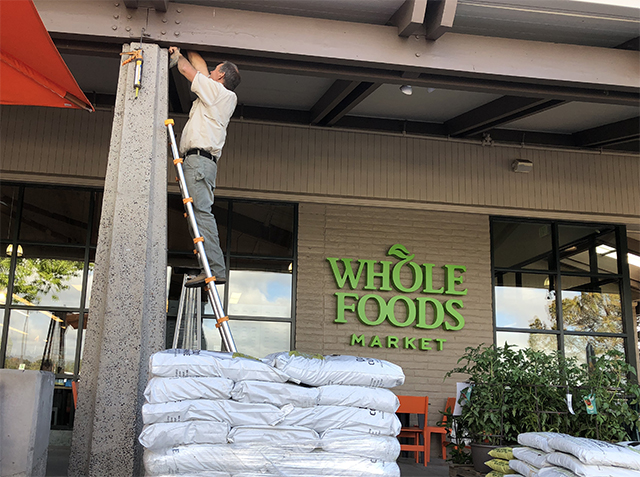 Just another day on the job 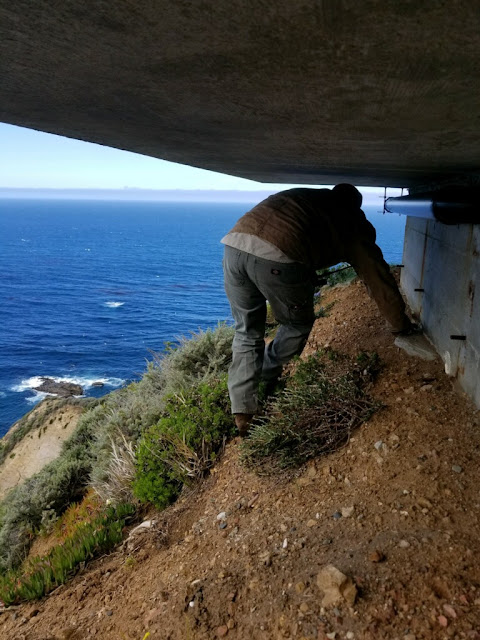 Rodent-proofing a home in Big Sur. 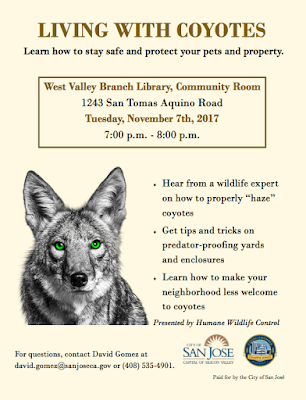 My wife, myself and our three cats live in an urban area near a creek and within half a mile of a small wildland park. We support local and migratory birds with fully-stocked feeders year-round. Birds make any neighborhood better with their songs and colors, plus they consume bugs and insects in the spring and fertilize native plants. We love to bird-watch from our living room and see how many different species we can find in our bird books.

We have placed appropriately-sized bird nest boxes around our property and have hosted several families of chestnut-backed chickadees, oak titmice and others, with our very own “bird B & B.” We even have a camera in one of the nest boxes and I have made a couple YouTube videos about the lives of our feathered tenants.

We protect the birds from our cats with enclosed cat-only areas, sometimes called “catios” that allow our cats to freely roam between the inside of the house, and several outdoor areas. Our cats love to watch and talk to the birds and the birds stay safe. Our catios protect our cats from large predators, loose dogs, traffic, and unscrupulous people. 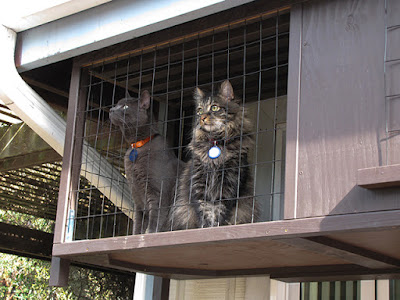 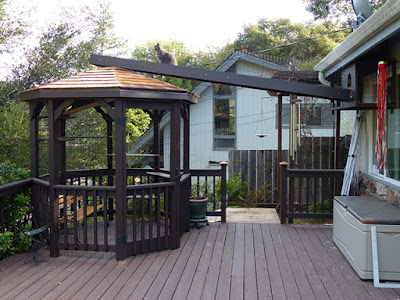 We utilize our garden and landscape drip-irrigation system to regularly replenish several birdbaths and a ground-level drinking area - used by both birds and just about all the other wild animals that make regular stopovers in our yard as they pass through. Of course we regularly check these for mosquito larvae, although our local birds are happy to dispose of the little devils for us as well.

Our water supplies are accessible to everyone while our bird feeders only feed birds, and when we put out bread scraps for squirrels and larger birds during the day so the less desirable nocturnal critters like rats and mice are not encouraged to seek it out.

We’ve had a great horned owl visitation, and some local gray foxes have begun to frequent our wildlife superhighway as they make their meal-catching and play-time rounds through our yard between the park area and the creek. A local Opossum has been investigating our yard as well.

We do what we can to encourage the critters we do want around and discourage the ones we don’t want around. We have been so delighted to see how much wildlife there is around us.

Link to videos I've made at home:

Short movie of us introducing two of our cats to one of our DIY "cat cages."
https://youtu.be/w8F1mWB4iQ4 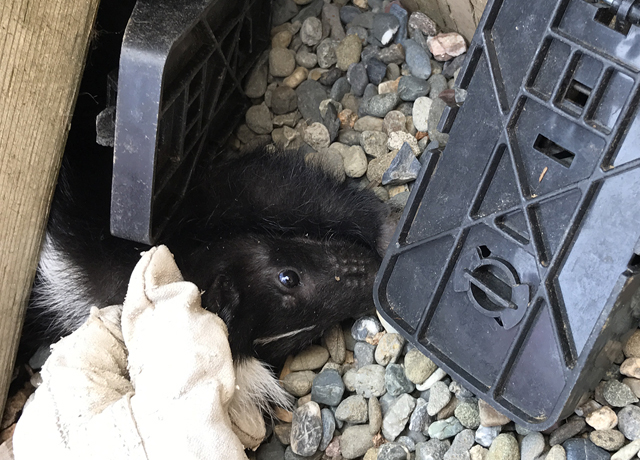 Larger animals being caught in rat trap - a growing problem since the invention of the "new and improved" rat and mouse snap traps with serrated jaws.

Unlike the the old fashioned smooth-edged snap traps that larger animals could slip out of, these newer traps have a stronger grip and "teeth" that make it impossible for animals to escape.

This young skunk ventured into a yard that had snap traps set outdoors by a barbecue grill that rats had been attracted to. Drawn by the smell of the grill or the rodents or the peanut butter bait, this poor skunk got both its front paws caught  - just a horrible accident and so avoidable.

Snap traps are not intended for use outdoors without being inside a protective case to prevent other animals from caught and injured. Unfortunately, as was the case in this situation, there was nothing on the packaging or in the instructions warning the consumer of the potential risk to other animals and the precautions necessary to avoid something like this from happening.

WES is petitioning the manufacturers of these types of traps for better labeling so accidents like this one - which could cost this skunk its life, don't happen. 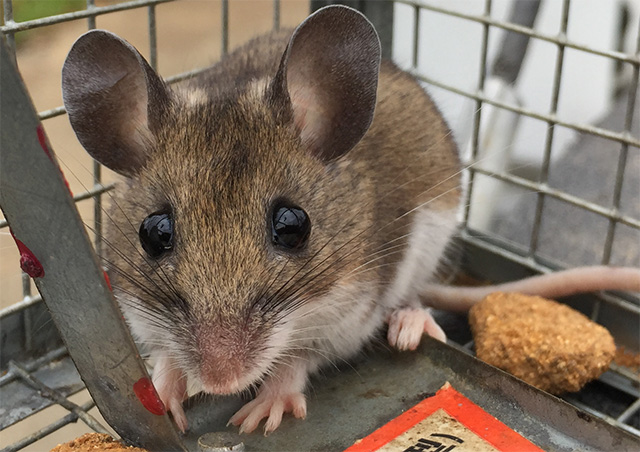 Another adorable deer mouse evicted from a home in Prunedale, CA after we shored up all of the entry points.

We were rodent-proofing a home in Carmel Valley, shoring up the exterior, making sure no more rodents could get in, and then live-catching the ones that were left inside the attic, when we discovered a new (new to us) species of mouse - a brush mouse! Just adorable!!!

Finding this native mouse, along with a couple of non-native roof rats, made me wonder how pest control companies determine the species they're killing when they set out poison, BECAUSE rodenticide labels specify which species the poison can be used to kill, and, per the Department of Pesticide Regulation, the label is the law.

As you can see, in this label the target species are named - but so are species that should not be targeted by this product in California...  they're marked with an asterisk. 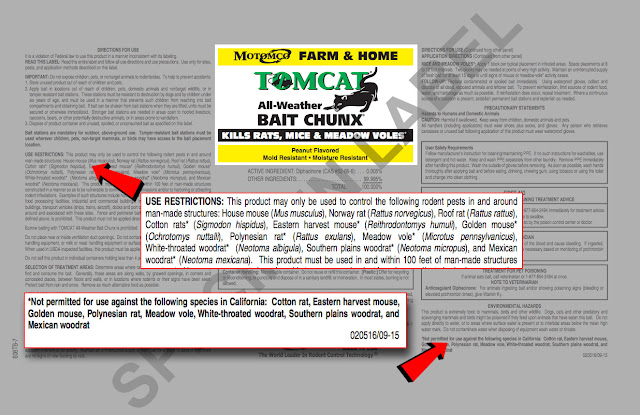 So, I was curious how this would be handled by the agencies that regulate and enforce pesticide use. How do they ensure non-targets - like the native brush mouse - aren't harmed?

But, the most memorable comment was his response to my concern that, unless pest control operators do their due diligence and make sure there are no native species present, then native species, like the brush mouse, will be poisoned. To which he replied, "Who cares!"

The conversation degraded from there and he postured, neither he nor anyone from the Commissioner's office would be interviewed on this subject. 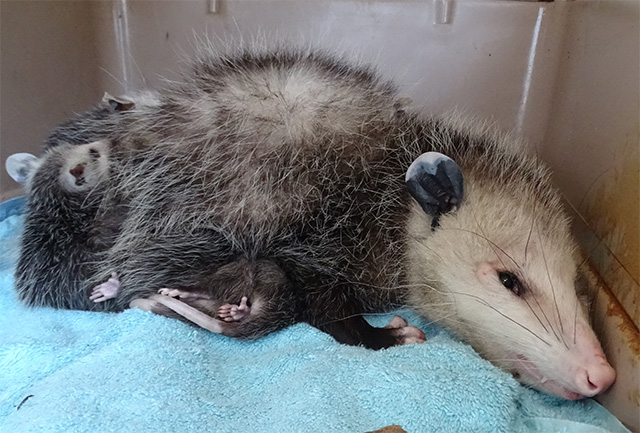 Today we received a call about an opossum that was causing quite a disturbance at a home in Watsonville. The resident explained how the animal was getting inside a converted garage - now used for storage, and pulling things off shelves and defecating all over the place. At the time of the call they said they could see the animal tucked back on a shelf sleeping, and it looked like there were a couple of young ones. 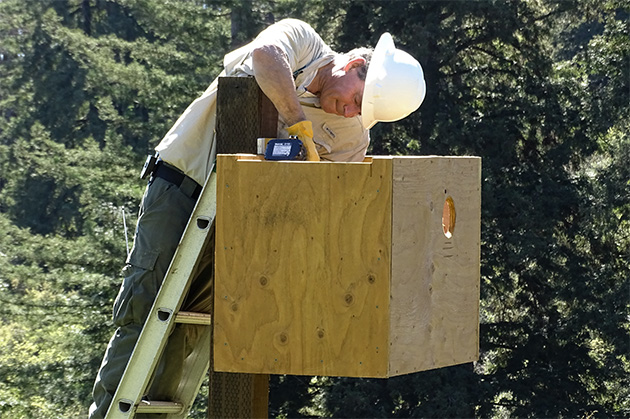 Creating a safe and sound environment for barn owls to raise their young has been, and I suspect it will continue to be, a journey of its own.

Welcome to the Teco and Lotte Chronicles... In December, 2016 we installed a barn owl nest box at the Haute Enchilada in Moss Landing California - part of the restaurant owner's commitment to sustainable practices and environmental stewardship. A pair of resident barn owls took to the box quickly. By January, the first egg was laid. Check back for frequent updates and happenings inside the nest. View the live stream on YouTube at Teco & Lotte.

To those who build and/or install or promote barn owl nest boxes,

This is a request to come together and agree on minimum overall size requirements and entry hole dimensions and placement.

In our line of work, sometimes we need to inspect inside walls or other inaccessible spots to locate trapped or nesting animals. The Crenova iScope was recommended by a colleague, and seems to be a decent tool for the job, and, at $20.00 on Amazon - you just can't beat the price.

Mouse in the house 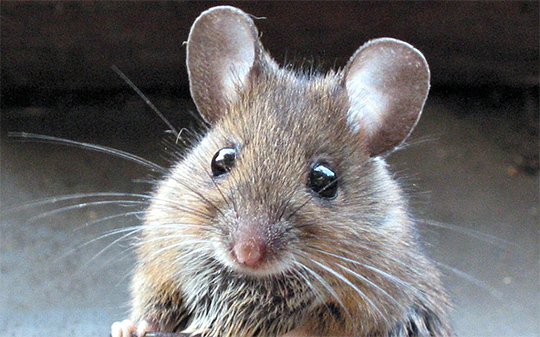 This morning, one of our clients called to give me an update. We'd rodent-proofed their home over a week ago, sealing up all the gaps and possible intrusion points and making sure there weren't any large animals living under the home. 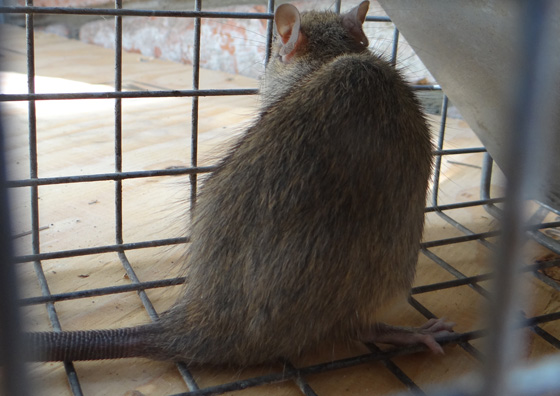 Ridding one's home of mice and rats can be a bit labor intensive, frustrating at times, but, once completed, the home should be rodent-free for many, many years.

The following post describes how to protect your home from rats and mice, for good, without using poison or other lethal means.
Read more »

A picture worth a thousand words 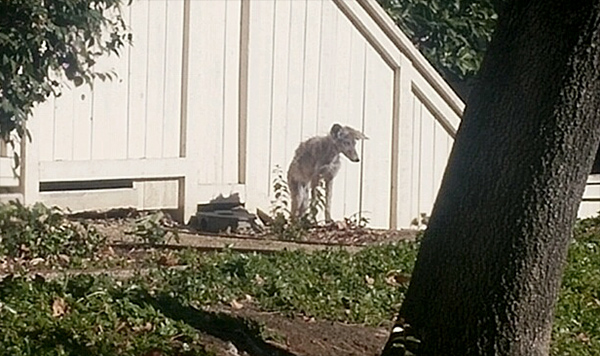 This picture was sent to us by someone worried about a coyote in their neighborhood.

Do you see what this is?

It's a coyote suffering from mange - an infestation of mites has caused the animal to lose fur and break out in sores. The coyote's ears indicate how cold and miserable it feels.

Look what it's standing next to. A poison bait station for rodents.

Perhaps the coyote is waiting for its next meal - another poison-laced mouse or rat.

Could this be the cause of this poor animal's failing condition?

Opossum in a garage...

Today we were called out to remove an opossum that had found its way into a garage, squeezing under a slight opening under the front door.

It had made itself at home, probably venturing out during the night to do its 'possum-thing, eating slugs and snails and foraging for other edibles, which, unfortunately too often, includes pet food left out overnight.

What do you think about coyotes in Laguna Beach?

There's a proposed plan before the City of Long Beach to increase trapping and killing of coyotes - blanket trapping in early spring to kill the pregnant females, and in fall to kill off the young of the year.

Apparently, this plan was offered by Animal Pest Management - a pest control company that had been contracted with the city for its services but has since (a week or so ago) been terminated. The city replaced APM with Critter Busters.

Over the last few months, a group of Long Beach residents have become very vocal about the presence of coyotes in their neighborhoods, demanding coyotes be trapped and killed. It seems to be a relatively small group of individuals from two Facebook groups, Coyote Watch Long Beach and Coyote Watch Garden Grove, who have, since 2013, been leading a campaign to force state and local government to eradicate coyotes.

We just had to share this sweet story from one of our customers. We love working with people who share our compassion for animals, no matte...